First to the Moon: Interview with Alexander Bornstein

Movie trends have changed shape for the last couple of decades, but television and documentaries are a musical blessing for training and experimentation. Besides, the recent anniversary of Man’s landing on the Moon has launched several productions about the subject and we’ll focus on one of them today: the documentary First to the Moon.

Alexander Bornstein’s score showcases a powerful main theme, which opens the CD and vertebrates the soundtrack. This work captures the evoking nature of Space and Humankind’s adventure. It’s clear that, given time and space (no pun intended), one may achieve results as good as these ones. Next you may find a short interview with the composer, so you may get to know him a bit better. If this piques your curiosity so far as to make you give a chance to the documentary or to purchase the CD released by Noteforte Music, you’ll enjoy it for sure.

Alexander Bornstein (California, 1986) has written music for feature films and TV Movies such as The Last Heist (2016), Kill Ratio (2016), The Surrogate (2018) or Murder In-Law (2019), and for the documentary First to the Moon(2019). He has contributed additional music to TV shows such asSupernatural, Agent Carter, Lost in Space or The Twilight Zone, and to films such as Baywatch(2017) or Shaft(2019). Alexander’s debut album, Schematic(2017), is available in all music platforms.

What is your first memory about creating music? The moment when you realized: “this is it, this is what I want to do.”

I actually started composing a bit late in life compared to most. Beyond a couple years of rudimentary piano lessons when I was still a kid, my music studies didn’t really begin in earnest until I was 20 ─I’d been pursuing filmmaking up until then. All that being said, I’ve been listening to film music since I was in first grade! I still remember the blank stares at Sam Goodywhen I would ask if they had the RoboCop or Executive Decision soundtrack.

When I started composing in college (on pencil and paper, then in Finale), I had the good fortune of meeting some professors who took me under their wing to study composition and Jazz Piano/Theory. A future in music was one I never envisioned for myself until they showed me it was possible ─I went on to get my master’s degree in theory and composition from New York University. I’m thankful every day for the ability to do what I do, and that “moment” you mention came as soon as I realized “I can do this” as long as I’m willing to put in the work. If I was involved with music in any capacity, it was a win for me. To be able to make it to where I am now, and work on the projects I have, really is a dream come true. 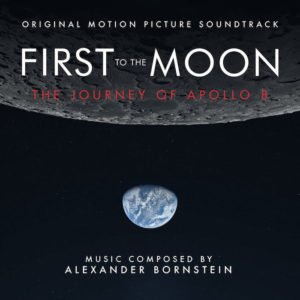 First to the Moon, one of your last works, has been recently released by the label Notefornote Music. What could you tell us about it?

As a longtime admirer of the 1960s space program, First to the Moonwas an amazing film to work on. I met up with Paul Hildebrandt, who directed and edited the film, in early 2018 and we started working on themes and an overall sound for the score that summer. Once we had come up with the main theme, I started working on the full score in August and we recorded in October. After we finished the film, I assembled the soundtrack based on what I thought might make the best listening experience away from the film. I’m a huge fan of how composers like Jerry Goldsmith and Elmer Bernstein used to arrange their albums to maximize the musical impact of their scores, and would like to keep doing that if given the chance in future albums.

Which was your musical approach to this documentary?

Paul and I decided early on that we wanted a variety of textures to accompany this story, but anchor it with a main theme. In addition to the orchestra, electronics and processed sounds were critical for these extra colors. I also decided early on that there would be only one principal theme that the score then grows from (in Crew you hear the theme on acoustic guitar and in the previous track 1968 on French horns, albeit in a minor key). Once I had the theme, I composed a three part suite (part one was about the astronauts love of aviation, two was about the challenge of getting to the Moon, and three was my take on the astronaut’s reading of Genesis on Christmas Eve) as a proof of concept for Paul.

Listening to your composition, it conveys many emotions. Where did you draw your inspiration from?

Thank you, I’m really glad to hear! Inspiration was admittedly very easy for First to the Moon. I’ve been enamoured by the space program since the 7th grade: an old after school routine for me was watching From the Earth to the Moon from start to finish and I used to be able to name almost every NASA flight crew in Apollo and Gemini. Being able to contribute, even in this small part, to the legacy of the Apollo program’s achievements was not something I took lightly and it was definitely a dream project to be a part of. Due to the pressure of this contribution, it was difficult to get started. In the end, once I tried to really let the pictures and footage of this incredible adventure serve as my inspiration, the music flowed very naturally. I wish that was always the case!

Could this work be one of your most rewarding musical experiences? There are many moments I specially love, such as the tracks Dark Side of the Moonor The Good Earth, which reminds me of Thomas Newman.

As of this interview, I’d definitely say this is the score I am most proud of. It was a great experience writing it, recording it, and everyone on the music team improved the music in ways beyond my wildest dreams. Being connected to a great story like Apollo 8’s is also a true privilege for me. The Good Earth underscores my favorite sequence in the film, so it’s really nice to hear you enjoyed that cue. 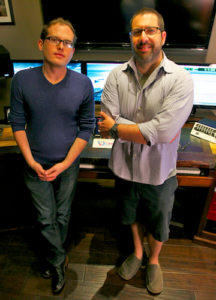 Going through your filmography, we see you’ve been associated with composer Christopher Lennertz. How is to work with him? What have you learned from him?

I’ve been working with Chris on and off now for almost seven years ─I was his assistant for several of those. I owe a lot to him and my experience after all this time has been fantastic. In addition to lots of great compositional insights, he’s a perfect case study on how to listen to filmmakers/clients. At the end of the day, this is a collaborative art form and Chris is amazing at getting to the heart of what needs to be done creatively and always approaching any challenge with an open mind. You can really see and feel people react positively to it.

You’ve also written music for one of the first VR networks. What could you tell us about that experience?

Invisiblewas quite a unique project to work on. Chris and I came on board in 2016 to work on it and, at the first spotting session, we were given VR rigs to watch the show in! That is NOT common. A lot of usual composing habits had to get turned on their heads, and we were given a lot of freedom to explore surround sound as a musical device. VR also challenges a lot of how a viewer experiences music during a visual story, since the medium is so immersive. I’d really like to do more VR if given the opportunity.

What do you feel when you make a recording in places so mythical as Abbey Road or Remote Control?

Pure terror! I’m kidding, but perhaps just a little. It’s very difficult to be in places with so much history and not feel intimidated by it. However, you just focus on the job at hand and get through the day. It’s undeniably exciting though! I’m not a big picture taker, but even I had to snap one when I approached the entrance to Abbey Road. There’s a little plaque by the door from the Westminster City Council dedicating it to Edward Elgar, who was one of the first composers to record there. Even after the long flight and being severely jet lagged, feeling that connection ─however small─ to an artist I admire so much was a very special moment.

Were you to recommend one of your works to a new fan, which one would you choose and why?

Definitely First to the Moon. I’m proud of both the film and the score, so it would be something I’d really like as many people as possible to watch/listen to. I was also really happy with my solo album Schematic, which was an experimentation with electronic music (mixed with some orchestral elements, like strings).

Could you tell us anything about your new projects?

I’m currently writing additional music for the new season of Lost in Space, The Boys and, in the fall, will be working on the final season of Supernatural with Chris as well. I will also hopefully have some exciting projects to announce later this year!

Good luck with them and thanks so much for your time!

Thank you so much for taking the time to interview me and your kind words about the score!