Género
Sobrenatural, Terror
Lo mejor
The musical balance and all the hard work behind
Lo peor
The isolated listening might be tough, but the music works amazingly within the images, especially the melodic portions

At the Devil’s Door (English)

After the good reception of the horror thriller The Pact (El Pacto, 2012), a finely crafted independent movie we reviewed some time back, many waited to see what would be Nicholas McCarthy’s next project.

And it was Home (At the Devil’s Door, 2014), a film with a better polish (though along the same lines of restraint). Unfortunately the surprise factor decreases in the end section (a bit foreseeable), even though all the film elements fit perfectly and work as a Swiss watch.

At the Devil’s Door – A New Pact

It is undeniable that there is a pattern behind both The Pact and Home. The first similarity is the two sister subject, sharing fate in both films. The subtle difference is that here the two sisters share the spotlight (perhaps Leigh a bit less); while in The Pact one of them disappears almost at the beginning.

Family ties, then, is another of the similarities. There are many in The Pact: the relationship between sisters, between their mother and them, between one of the sisters and her daughter and, finally, between the other sister and her niece. Here it would be both sisters and, eventually, someone else I will try not to disclose, in order to avoid falling into the misfortune of Spoiler (easily guessed in the preview). We also have these parents that want to sell the house and, the other core of the film, their daughter.

On the other hand, there is a pact; in The Pact it will unfold eventually, being the real narrative heart of the story, the reason for all that happened in the family house.

In Home there is also a pact, stated from the very beginning, when a young girl sells her soul to the devil for $500. She feels something unusual, but due to her infatuation for her boyfriend, she agrees to take part in a game where she must go through three trials in an abandoned trailer with two strange and disturbing passengers). What a boyfriend, right? This is one of the most interesting parts of the movie. Three characters we will not hear about again, but who represent the horror of the pact, the devil’s appearance.

This is the storyline introducing us to the film. And one success of the director is the nonlinearity of the story. At least till Leigh’s tragic fate.

And, once checked the similarities, let us go back to the beginning and talk about the story. Leigh is a real estate agent trying to sell a house, whose owners are on an urgent need to get rid of it due to its mortgage, the lack of income and perhaps to something else…

During the sale process, Leigh sees a girl with a red raincoat with a hood come and go from the house. This girl (Hannah White) happens to be the one from the beginning, the one who “sold” her soul.

The narration is altered for Leigh’s storyline in an unannounced flashback. Thus we know about the disturbing possession of Hannah in her room; though the most disturbing is to discover that the girl is dead. She killed herself in trying to avoid being possessed; vainly trying to break the pact (burning the money will be of no help). Unfortunately, Leigh discovers the fact too late and the evil presence who dwelt in the girl (a presence not seen a lot, but absolutely scary each time it is felt) tries to possess her. However it does not find in her what it expected… though it does it in her sister Vera, who will soon begin to unfold terrifying facts about Hannah and the demon dwelling in her, leading to a resolute, but unsurprising, ending (a shame, to be honest).

The three main actresses are to be praised, as they are great. Mainly with their eyes, and not many words, they build quite interesting characters, giving a lot away, which provides emotional depth. The three of them are really well, putting together the plot of three women suffering a similar fate, with the common bond of the 500 bucks (Leigh touches it in a closet, getting infected of Hannah’s pact, and Vera touches a piece of blackened furniture, a stain that will not go away easily, the mark of the beast).

There is also a lot of symbolism; red as the color of devil (the sneakers of the little girl at the end, the red raincoat) or the hoods of some of the children.

There is rhythm in the storytelling, keeping you interested in the plot; but, as the end approaches, above all in the final third, the story becomes predictable. Fortunately the narration does not lose its rhythm, though one limits himself to wait for the dénouement (even if there are still a good couple of thrills on the go).

In comparison, The Pact was fresh, original and surprising, and though Home is more mature and better crafted, the first wins the game.

A small step back, but with a quality marking, which is not a little thing for a genre quite constrained these days.

What will you get? 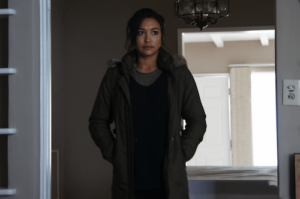 Ronen Landa comes back from The Pact, with craft and solvency, creating a melodic main theme superior to the one from that movie. A theme that represents the three women: the sisters, Leigh and Vera, and the pact girl, Hannah.

The piano draws the main notes, providing these characters with a fragile melancholy, though the three of them are, in their own way, women with some scars. Especially both sisters, as Hannah’s problem is her age and naivety.

And there is horror, when strings, brass, percussion, voices and electronic sound effects disturb the melodic patterns in a menacing, frightening way, even in the main theme itself.

Evil has not its own theme, but a number of excellent musical resources, such as out of pitch violins or distorted, almost inhuman, voices.

As in The Pact, Ronen Landa offers an even more balanced work, where the main theme plays a key role in connecting the story of the three women. A theme to be heard in tracks Leigh and Vera.

In fact, Leigh (Theme from “At the Devil’s Door”) is the album’s first track and where Ronen introduces the main theme, with piano playing some notes with a final kind of electronic sound, repeated with a delay or with an echo, almost a subtle percussive beat, causing a turning point. The music moves from a certain melancholy or sadness to a latent, enveloping darkness; lurking, waiting for potential victims.

Vera follows the same lines, though it appears in another two tracks. The first one is Greenville, related to the moment when Leigh drives to the house on sale in that neighborhood. This track starts with the main theme, moving into a phase where Ronen uses a stressing musical rhythm. The rhythm increases its intensity with flute and percussion (a vibraphone), accompanied by piano and strings, while Leigh approaches fate. 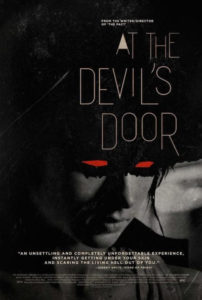 The other one, perhaps the best track in the album, is Come to Me. Vera makes a decision to relocate, based on the results of the investigation about the deaths of Leigh and Hannah. As in The Pact, it is the longest cue (six minutes and twenty-seven seconds). With an excellent development, it is a good example of Ronen’s craft: perfectly fitting tempos, taking the watcher from the main theme (Vera’s sadness and loneliness) into the presence of evil, with strings and brass announcing the devil’s arrival.

In between, a kind of sonar (an electronic hum) appears (as in the track Apparitions in The Pact), forgetting the theme for the women, with the piano gradually changing its musical phrases and building a crescendo until the climax, when Vera is eventually possessed.

And, speaking of the devil, it is interesting to notice that he has no theme, though Ronen shows his presence through a range of different sounds and musical resources. For instance, So He Knows Your Name is a brief cue which introduces, at its very end, a trite but interesting musical resource: chaotic and thrilling prepared violins playing like crazy and representing evil.

This resource is used again at the end of Come to Me, or in track Rocking Horse, when the red hooded girl rocks on the horse while wickedly observing the infant she is baby-sitting; though we have more musical elements, such as percussions or electronics.

Violins are playful again, along electronics, in You’re All Dead (the disturbing scene that follows Rocking Horse). It is an intense cue, with ostinato percussion. Expulsion is similar, but opening in a much intense way; an excellent horror cue which conveys unease, especially noticeable in Vera’s character, who requires medical care after finding what she has inside.

Besides, at the beginning of track You’re All Dead, brass may be heard, with a constant sound, as if trying to announce a presence. This use of brass is heard in other cues, such as Rocking Horse, and it is another interesting resource.

There are voices too. Pellem Pro Pelle (skin for skin) is a disturbing highlight, a satanic song with inhuman vocals, along with female voices singing in Latin in the final section. In the middle of Come to Me, there is a soft choir, before “the sonar”.

The last tracks, representing the film’s climax, with Vera chasing the girl, are also of interest. From the storytelling perspective, the director manages timing, but the resolution, although successful, is no surprise.

In any case, Ronen is up to it and offers two excellent cues, Exposure and Home. In both of them, but especially in Exposure, the evil motifs may be heard: the diabolical violins, electronics, brass, voices, tapping. All of it part of an intense, brief action cue and with a thrilling ostinato, representing Vera’s approach to the girl; both great moments visually too.

Home closes the film, and is also part of the end credits, with a female choir singing in Latin. And, as a bonus, a song: Man of My Dreams (evil bitchiness?… Not a bad joke).

Composer Notes and The End

As Ronen Landa writes in the liner notes of the album, he makes use of music and languages of the Silk Road regions. The chants, real voices recorded by the composer, and some instrumentations and experiments come from Macedonian, Latin and biblical Hebrew languages.

The composer himself also reveals that percussion comes from Tibet or India and, for the chants, low voices sing in Hebrew and women in Latin (in Pellen Pro Pelle or in Home).

Many instruments were modified, such as the bells in order to sound like a goat bell, and there is a wide gallery of electronic sounds for conveying evil, without forgetting the flute musical figures, emulating Macedonian musical languages.

In short, Home is a catalog of resources, experimentation and inquisitiveness hard to find in modern horror films. And that is something we must be thankful about.

Thanks to Oscar Salazar for the Translation